My cop friends and I also had an expression about human nature while we encountered the daily depravity of our fellow man—people stink (the sanitized version).  While certainly not as elegant and nowhere near as deep as James Madison’s quote, it ultimately conveyed the same sentiment.  Men are no angels, and there’s something inherently wrong with the human condition.

While we might desire to do what is right, good, and noble, there’s an epic struggle deep in the spirit of people, the constant draw toward evil, sinful, and utterly selfish behavior.  The Founders knew this and drew much of their understanding from Scripture: “The heart is deceitful above all things and desperately wicked, who can know it?” (Jeremiah 17:9) and “There are none righteous, no not even one” (Romans 3:10).  No one is immune from the fallen condition.  Mankind’s nature is depraved and unchangeable, at least until Jesus returns.

The modern view of society and human nature is in stark contrast to the traditional biblical understanding.  The prevailing belief today, especially of those on the political and social left, is that people are born basically good and will gravitate instinctively towards selfless and moral conduct.  When deviant behavior arises and someone commits a horrible act of violence or continuous anti-social behavior, it’s the result of flawed educational and societal structures, such as family, government, and the economic system (courtesy of Marx’s and Engels’s theories).  Evil does not exist, especially an evil inextricably embedded in the human heart.  Only good decisions and bad decisions, which can be cured if people are properly trained and society tweaked in the just right way—with massive government intervention and control of course.  All the flaws and foibles of men can be extinguished and the Utopian dream society of perfection and ultimate peace can be realized.  To the Utopian, human nature is malleable and fluid, evolving ever forward toward the ideal person.

Admittedly, it’s an attractive and seductive theory.  This vision tempts us to believe we possess the ultimate power to cleanse humanity of all imperfections by the sheer might of the human will and usher in a heavenly realm on Earth.  We, as humans, can be the arbiters or our own destiny, the Chief Authority of all things. We, too, can “be like God.”

This Utopian ideal of human nature is also the driving force behind much of the extreme political left and helps to explain why they see an all-encompassing government as the answer to all of society’s woes. It also helps explain why at every shooting or tragic incident, politicians clamor to the microphones to promise new laws or edicts to keep it from ever happening again, as if that were really possible.

So what does human nature have to do with the gun control debate?  Everything.  If the modern Utopians are correct and the right form of government can propel society upward and forward toward a more perfect form of humanity, then a benevolent ruling class can be trusted with unfettered power to govern over the people with no controls or buffers in place. The peoples’ need to be armed to restrain the powers-that-be would be unnecessary.  But if the biblical understanding is true, as the Founders believed, then the last thing anyone would want to do is give an oligarchy absolute power and hegemony.

Philosophers through the ages have debated man’s true nature, but in the end, most all the theories tend to fall somewhere within these two competing worldviews.  So which concept is correct? Anyone who has spent more than ten minutes around children should be able to answer this in a second.  No one has to teach a child to lie, cheat, steal, be violent or self-absorbed; they come pre-packaged that way.  We spend the first eighteen years of their lives guiding and teaching them to resist their innate natures and become civilized adults, often to great frustration.  We’ve all seen what happens to the children who aren’t taught right from wrong, values and morals, self-control and self-respect.  They don’t gravitate towards virtue, morality, and decency; they populate the jails and prisons across the land and wreak havoc on society as a whole.

Even in the best circumstances, when the restraining influence of moral foundations and deep family bonds are instilled in a person, the internal tug-of-war of good versus evil is still a daily battle—a battle that’s never truly won in this lifetime.  The Apostle Paul, the writer of much of the New Testament who had been in the direct presence of Christ, couldn’t even tame his own rebellious spirit:  “For I have the desire to do what is good, but I cannot carry it out.  For I do not do the good I want to do, but the evil I do not want to do—this I keep on doing.”  Five thousand years of recorded history serves as a gory testament to the true nature of mankind.  The human story is replete with men’s bloodlust to conquer and dominate other men and to descend to their very base natures.  The last century alone—with its world wars, civil wars, and genocide—is the bloodiest of all time.  The current conflicts and chaos around the globe serve as further affirmation that Utopia isn’t blossoming forth anytime soon.

The reality of the base nature of human beings grows even more grim when we witness a single, horrendous crime that shocks our collective conscious—as happened in Sandy Hook.  We’re appalled and sickened by the actions of one person who could perpetrate such evil on twenty six innocent, defenseless victims.  But the carnage inflicted by a single individual pales in comparison to the horrors that have been unleashed in the past by wicked men who have consolidated control in the form of all-powerful governments—especially when the citizens were as unarmed and helpless as the children in that classroom.  Tens of millions of innocent men, women, and children have been slaughtered at the hands of their leaders, and their memory should not be so easily forgotten or dismissed.  Stalin, Mao, Pol Pot, and Hitler just to name a few all seduced their citizens with lofty words and calls for a supreme State to take care of them, to protect them and rule without restriction.  Each implemented gun control with fanfare and promises of security and peace.  Their well-documented examples should serve as an omen for those who think the State will always observe the rights and human dignity of the people without checks and balances.  A National Center for Policy Analysis paper titled Murder by State by Gerald W. Scully estimates that “At least 170 million people — and perhaps as many as 360 million — have been murdered by their own governments in this century [20th]. This is more than four times the 42 million deaths from civil and international wars.”  These numbers don’t even include the multitude of victims who were imprisoned, tortured, or lived in absolute fear of their own maniacal leaders.  Tyranny and constant cruelty are the rule for unrestrained governments rather than the exception.

Each of these offending regimes had two traits in common—they were governed by people and they all claimed gun control was for the good of everyone before disarming them.  Since we, too, are ruled by flawed, fallen humans, what makes us think it couldn’t happen here?  Gun control doesn’t mean the absence of guns in society; it only means that one side of the equation has all the guns—and, thus, all the power.  As the saying goes, “Power corrupts, and absolute power corrupts absolutely.”  Human nature is too frail, corrupt, and bent towards violence and domination to allow a ruling elite to have absolute control over the people.  That’s how citizens can quickly become serfs and slaves, and, ultimately, victims.

While not all governments that have enacted gun control have descended into these Hell-on-Earths, Australia and England come to mind, ignoring this lesson from the past is perilous and foolhardy.  (I’ll address this in another post.)  I could cite example after example of governments abusing their authority and the horrific aftermaths, but I’ve yet to see a single instance of the Utopian vision actually working anywhere.  No matter, though.  Bad ideas seem to have long shelf lives and die hard deaths.

Men are no angels.  And our Founders were no dummies. They didn’t come up with the Second Amendment willy-nilly.  They’d studied, debated, and deliberated and were well aware of weaknesses and proclivities of mankind.  They instituted checks and balances at every level of government precisely because our nature is broken and cannot be trusted with too much power in the hands of too few people.  The final and most important check, an armed populace, keeps a delicate yet necessary balance between citizens’ rights and leaders’ responsibilities, like equal weights teetering on scales.  Mutually dependant, mutually respectful.  Neither one will do anything rash because it would be disastrous for both.  But tip that balance even a little, and someone comes crashing down hard—and it’s almost always the citizens and whatever rights and freedoms happen to be left over.

While we grieve for the twenty six innocent victims at Sandy Hook, we shouldn’t allow anyone—regardless of good intentions or emotional pleas—to remove the only tangible safeguard citizens have against the most powerful government that has ever existed on the planet.  With the right to bear arms firmly in place, our leaders, I believe, will continue to respect the rights of the citizens and remain a stable force for democracy and freedom in the world.  Without it, who knows?  I fear the immense power and global reach of this government is way too tempting a prize for men of ill will, intoxicated with the desire to exploit that power for their own devices.

“The strongest reason for the people to retain the right to keep and bear arms is, as a last resort, to protect themselves against tyranny in government.” ~ Thomas Jefferson. 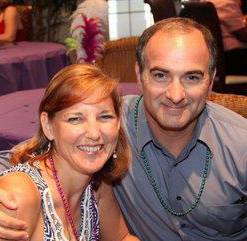 Mark Mynheir is an author, a former Marine, and a thirty year police veteran who worked as a narcotics agent, a S.W.A.T. team member, and a homicide detective.

Mark has published five novels, two devotionals, and numerous articles. He is a sought after speaker and teacher, and he’s still not sure what he wants to be when he grows up. Mark is married to the love of his life and has three fantastic children.